Free limited-edition "Bootie Mashes Michael Jackson" CDs to the first 100 people through the door!
Bootie celebrates Michael Jackson's birthday with an evening filled with mashup tributes to the late, great "King of Pop." Resident DJs Adrian & Mysterious spin MJ mashups throughout the night, while at 11 PM, live Bootie house band Smash-Up Derby reimagines what it would sound like if Michael had fronted such bands as Nirvana, Guns N' Roses, and The Hives! 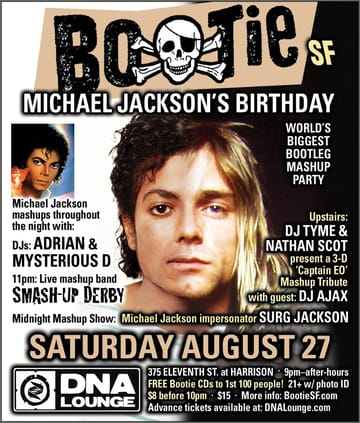