Free Bootie mashup CDs to the first 100 people through the door!
For four years, Bootie Mashup has been cybercasting live its DJ sets from DNA Lounge to the virtual world of Bootie Second Life, which takes place at Club Republik, one of SL's longest-running "virtual nightclubs." But tonight, Bootie Second Life comes to Real Life, as the party at Club Republik gets projected on the DNA Lounge's big video screens. Bootie SL's Keela Latte hosts.

On the main floor decks, Bootie LA's co-promoter and resident DJ Paul V. comes up to SF, while DJ Fox and John!John! join in for late night and early sets, respectively. For the Midnight Mashup Show, Genie Cartier returns to perform her aerial rope act above the crowd.

In the upstairs room, prepare to be glitterized at Glitterazzi. From the co-creator of Blitz N' Glitz & Bishopemagnetic, Meikee Magnetic teams up with Reyka and Huffy to spin explosive sets of electro, mashups, and house. And finally, in the green room -- from Austin, Texas -- come the girls from "Drunk Dial," the live-streaming call-in drunken advice web show. 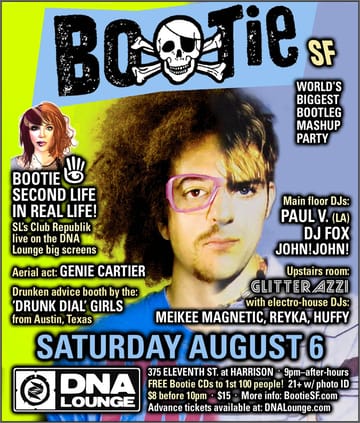