Free Bootie mashup CDs to the first 100 people through the door
"Live" on stage, Bootie presents Girl Tack, the nation's premiere Girl Talk tribute act, playing the classic 2006 'Night Ripper' album in its entirety! And of course, you'll be able to dance on stage with him! At 11 PM, Bootie's house band Smash-Up Derby takes the stage with a set of live rock mashups, and from LA, indie-electro band Purple Crush performs the Midnight Mashup Show.

Purple Crush will also be taking over the upstairs room, as Air Jared and The Pop Bitch spin electro-disco-house-indie-pop, as well as radio pop remixes. Resident DJs Adrian, Mysterious D, and John!John! will also all be taking turns on the decks, both upstairs and downstairs, to keep you dancing all night long.

Launched in 2003 in San Francisco by A Plus D -- aka DJs Adrian & Mysterious D -- Bootie was the first club night dedicated solely to the burgeoning artform of the bootleg mashup -- and is now the biggest mashup event in the world, with regular parties in several cities on four continents. Keeping your brain guessing and body dancing with creative song combinations, Bootie mixes and matches every conceivable musical genre, era, and style into one big dance party where everyone feels welcome, providing the soundtrack for the A.D.D. generation ... and free mashup CDs, given away like candy! 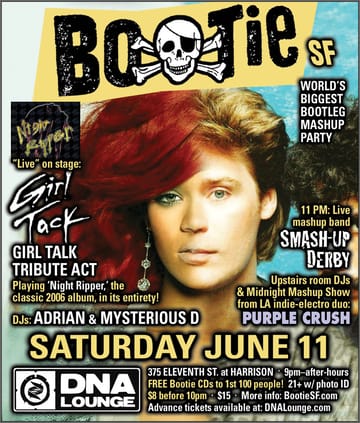