Ladies of the 80s

Trannyshack goes back to the decade when MTV played music videos, Lady Gaga was (literally) born, and Michael Jackson was black. It's a Trannyshack Ladies Of The 80s Night!

The ultimate triple threat... actress, singer & dancer Stacey Q, born Stacey Lynn Swain, is best known for her worldwide smash "Two of Hearts". Her first 3 singles soared to the #1 spot on Billboard's Dance Chart ("Two of Hearts", "We Connect" and "Insecurity") in 1986-1987. She released 3 albums ("Better Than Heaven", "Hard Machine" and "Nights Like This") and before that in 1983 as part of SSQ released the cult classic "Playback". As an actress, Stacey Swain was featured on the TV series "The Facts of Life" (1987), in which she had a recurring role as "Cinnamon" (opposite the one and only George Clooney). Later she would go on to appear in the sitcoms "Full House" and "Mama's Family", as well as star in the feature films "Cave Girl" & "One Man Force". 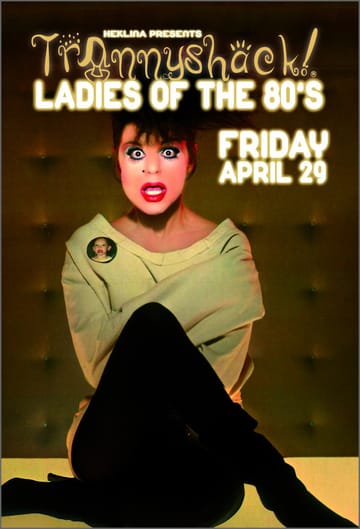