Costume Contest! Dress up in costume for your chance to win cash prizes!

Everyone who enters wins a Free CD!

Free Bootie mashup CDs to the first 100 people through the door!
Sick of the crowds on Halloween? Then come to APRILWEEN! Yup, Halloween in April -- a holiday so nice, we're doing it twice! Why wait until October to wear a costume? Dress up to enter our Costume Contest, with hundreds of dollars in cash prizes, and a free Bootie CD for anyone who simply enters! House band Smash-Up Derby will take the stage at 11 PM for a special spooky Aprilween set, while resident DJs Adrian & Mysterious and guest DJ Faroff will break out the spooky mashups to keep you dancing late into the witching hour!

For the Aprilween Midnight Mashup Show, the Funk4Soul Dancers will do their own hip-hop-infused version of Michael Jackson's zombie "Thriller" dance, while La Femme channels Lady Gaga. And in the upstairs room, Squrrrl will don their furry animal costumes, as DJs Ben Holder, Bill Dupp, and Papa Tony, along with host Danyol, present a nutty night of house, electro, and breaks, with plenty of funk in-between. 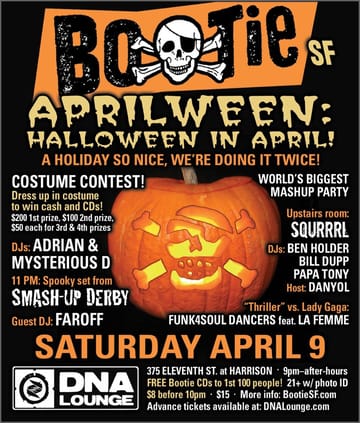