Free Bootie mashup CDs to the first 100 people through the door!
From Nashville, Bootie Mashup is proud to present mashup's next big thing, Titus Jones. With the recent release of his first full-length mashup album, "Culture Shock," Titus Jones has proven himself a master of multi-song poptastic mashups, and it's no wonder he's currently one of Adrian & Mysterious D's favorite mashup producers in the world.

At 11 PM, live mashup rock band Smash-Up Derby takes the stage, while for the Midnight Mashup Show, it's the return of Monistat! And in the upstairs room, dance like it's the end of the world with Apocalypso (Third Fridays at Cat Club). DJs Six, Candy, and Starr will spin the best new indie-electro to get your ass shakin'! 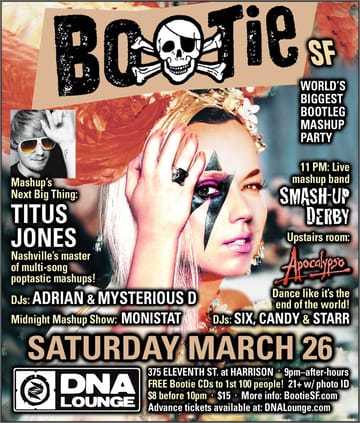