FREE Bootie mashup CDs to the first 100 people through the door!
Fresh from their appearance at Bootie Rio's Carnaval party in Brazil, resident DJs Adrian & Mysterious D will be bringing back some Brazilian flavor for their own Brazil Carnaval Party at Bootie Mashup! Famed Brazilian mashup DJ Faroff will be doing a video mashup set as well, and will get his set kicked off with a Midnight Mashup Show performance from Samba Queen Maisa Duke & the Energio do Samba Brazilian Carnaval Dancers!

At 11 PM, house band Smash-Up Derby will hit the stage for a set of live rock mashups. And in the upstairs room, Joshua J presents Big Top, as he and DJ Robert Jeffrey -- along with legendary club hostess Terry T -- bring SF's gay clubland, drag, freakshow dress-up party to Bootie, for a family feud of electro-house mashups and remixes! 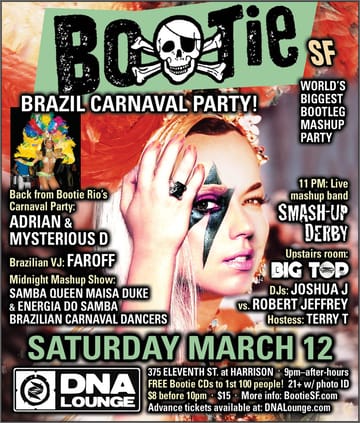