Free Bootie mashup CDs to the first 100 people through the door!
It's The Evolution Control Committee's official CD release party for "All Rights Reserved," the band's first album in seven years! Since 1991 - long before computers made it easy to be a copyright criminal - The ECC has been challenging copyright laws the hard way, with releases like their "Whipped Cream Mixes" (often cited as the first musical mashup) and "Rocked By Rape", which sampled CBS anchorman Dan Rather and earned the band a legal cease & desist order.

Now The ECC goes even further with their post-mashup album "All Rights Reserved," which, with its Listener Licence Agreement (similar to those required to install software) you are legally forbidden to even hear it! Even with that legal safeguard though, both the pressing plant and distributor initially refused to handle the album, due to copyright worries! The ECC celebrates its long-awaited release with a special show live on stage at 11 PM.

In the upstairs room, it's the return of Bootie Seattle resident DJ Freddy, King of Pants, who will be teaming up with SF's DJ Fox for some hot mashup action! And for the Midnight Mashup Show, drag queen Virginia Suicide takes the stage ... not to lip-sync, but to sing an A Plus D mashup live! 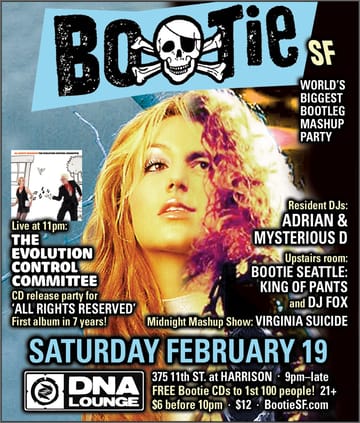