Free mashup CDs to the first 100 people through the door!
As the "go-to" video remixer for the international mashup scene, Australia's VJ Brewski has created well-crafted mashup videos for some of the world's best bootleggers. And as Bootie Australia's resident DJ, he certainly knows the big Bootie hits, which he'll be video-mixing into his showcase "Video Vegemite" mashup video show, put together especially for his debut U.S. tour.

In the upstairs room, Bootie welcomes another kind of Booty -- queer scene-makers and nightlife impresarios Juanita More! and Joshua J bring their infamous Castro party, Booty Call Wednesdays, to Saturday night in SoMa! They'll even have a special Pirate Bootie backdrop for pictures, so you can try your hand at modeling for photographer Moreboy Isaac. On the main floor, house band Smash-Up Derby hits the stage at 11 PM, and for the Midnight Mashup Show, drag fashionista Mss Vee makes her Bootie debut! 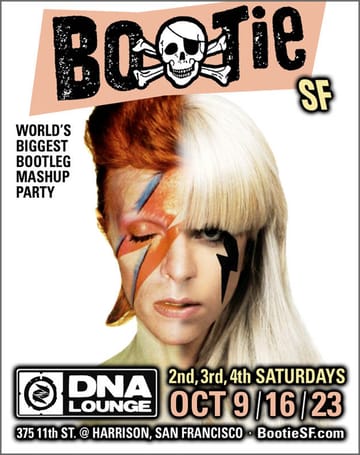