Lovecraftian themed vignette by:
Shadow Circus
C'thulhu themed costume contest:
Prizes from Steve Jackson Games
Including:
Best Lovecraftian Costume (Male/Female)
Best C'thulhu Themed Costume
Best Non-Lovecraftian Monster
Abney Park comes from an era that never was, but one that we wish had been. An era where airships waged war in the skies, and corsets and cummerbunds were proper adventuring attire. They've picked up their bad musical habits, scoundrelous musicians, and anachronistically hybridized instruments from dozens of locations and eras that they have visited in their travels and thrown them into one riotous dervish of a performance. Expect clockwork guitars, belly dancers, flintlock bassists, middleastern percussion, violent violin, and Tesla powered keyboards blazing in a post-apocalyptic, swashbuckling, Steampunk musical mayhem.

Swing Goth is what happens when rock-a-billy meets goth, and is peppered with a little blues, waltzing and a healthy portion of dirty dancing... all to modern music. 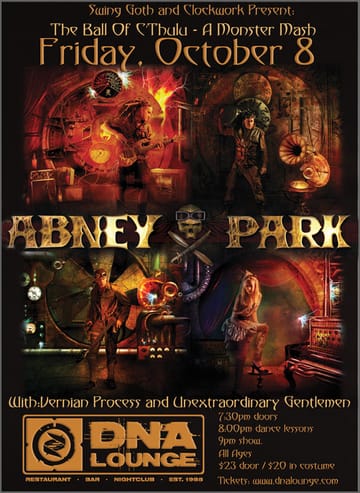