Trannyshack continues its series of superstar tribute nights with a salute to one of the strongest, most compelling female rock performers of all time... Siouxsie Sioux!

After making a name for herself as a central figure in the U.K. Punk Movement of the late 1970s, Siouxsie (with the Banshees) made her musical mark with post-punk masterpieces such as Christine, Happy House, Israel, Arabian Nights, and Cities in Dust. Inspiring countless young girls and boys to express their darker side, Siouxsie herself became a style icon with her signature gothic make-up and spiky black hair. As a result of her uncompromising attitude, other-wordly lyrics, and unique persona, Siouxsie is truly one in a million, and a true Trannyshack icon. 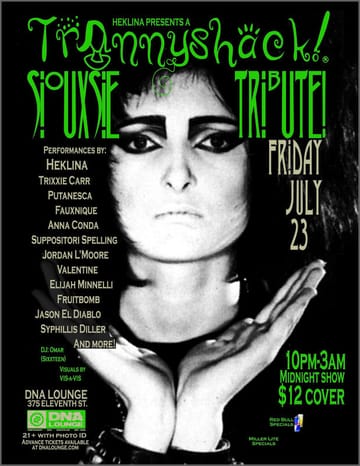