Rob Metal
One of the most intense and technical of the contemporary death metal bands, Origin has returned to stake their claim as the leaders of metal's new wave of extremity. Antithesis explodes out of the box at breakneck speed, with guitars and bass shredding wildly behind a beastly 3-vocal attack, slowing only for the virtuosic soloing. Faster, heavier, and decidedly more advanced than anyone could have ever envisioned the genre becoming, Antithesis is a modern day death metal classic, which proves Origin stand head and shoulders above their peers. New edition to the group, local boy Mica Meneke of Sol Asunder, will be taking on the role as lead vocalist. 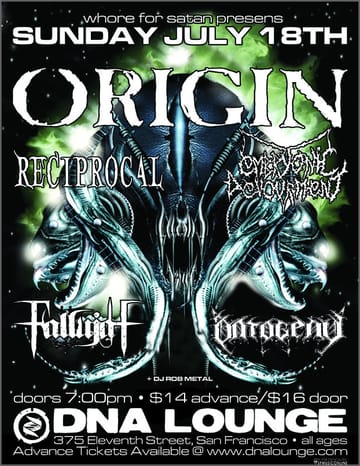 Origin: Finite
2010 Best of the Bay:
"Best Whore for Satan"
Past related events: