DJ Badjew
Saint Vitus are a highly influential American doom metal band from Los Angeles. They have been regarded as one of the first bands of the genre, starting out as early as the late 1970s, along with Pentagram and Trouble. For most of their career, the band comprised vocalist Scott "Wino" Weinrich, bassist Mark Adams, guitarist Dave Chandler and drummer Armando Acosta. After breaking up in 1996, Saint Vitus briefly reunited for a tour in 2003, and are back together again as of 2008 with Henry Vasquez of the band Blood of the Sun on drums.

Support this evening comes from Hammers of Misfortune, Walken, and the 70s sounds of Stone Axe from Washington. 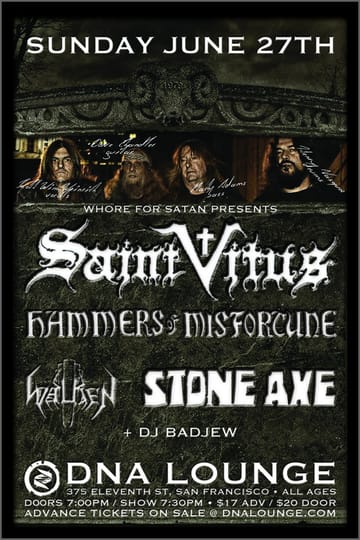