Free mashup CDs to the first 100 people through the door!
Direct from Brisbane, Australia, Bootie is proud to present Aussie DMC champ and D-Fault Records artist Cutloose. Currently on his third U.S. tour, Cutloose's exceptional mixing skills and high energy sets have him jumping from R&B and electro to funk and disco, dropping Michael Jackson and Dr. Dre alongside Run-DMC and Daft Punk, and making it seem as easy as ABC, earning his reputation as a "one-man party mashup machine."

Launched in 2003 in San Francisco by DJs Adrian & Mysterious D, Bootie was the first club night in the United States dedicated solely to the burgeoning artform of the bootleg mashup -- and is now the biggest mashup event in the world, with regular parties in several cities on four continents. Keeping your brain guessing and body dancing with creative song combinations, Bootie mixes and matches every conceivable musical genre, era, and style into one big dance party where everyone feels welcome, providing the soundtrack for the A.D.D. generation... with free mashup CDs given away like candy! 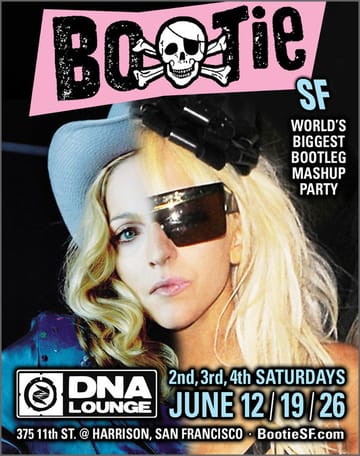