Free mashup CDs to the first 100 people through the door!
As the musical genius behind the annual "United State of Pop" mashup -- which seamless blends each year's Top 25 pop songs and into a singular track -- DJ Earworm has seen his star rise these past few months, as his "United State of Pop 2009" went viral (with over 16 million views on YouTube) and then exploded into a bona fide sensation, garnering attention from CNN, MTV, Entertainment Weekly, and a slew of other media outlets, as well as charting on radio stations across the world. Needless to say, Bootie is pleased to have Earworm back for a showcase set!

Joining him in the main room will be special guest DJ Tripp, holding it down while residents A+D are on tour in Europe. Live mashup rock band Smash-Up Derby will feature new singer Mimi Lee Ferrari fronting the band solo for the first time, and for the Midnight Mashup Show, burlesque star Sparkly Devil returns to the Bootie stage. In the upstairs room, it's Electro-Bootie, with DJs Matt Hite and Mykill spinning electro mashups, remixes, and bootlegs all night.

Launched in 2003 in San Francisco by DJs Adrian & Mysterious D, Bootie was the first club night in the United States dedicated solely to the burgeoning artform of the bootleg mashup -- and is now the biggest mashup event in the world, with regular parties in several cities on four continents. Mixing and matching every conceivable musical genre, era, and style into one big dance party where everyone feels welcome, Bootie provides the soundtrack for the A.D.D. generation -- with free mashup CDs given away like candy! 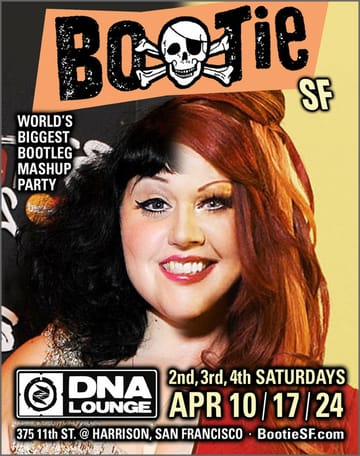