Decay
Melting Girl
Joe Radio
Hailing originally from Ireland and Britain, VNV Nation have been breaking new ground in Electronic Body Music for 15 years. Ranging from their signature warlike marches to noise-influenced techno and epic, uplifting trance, VNV is now an international sensation. Frontman Ronan Harris is well known for his gregarious stage presence, and his programming work on AFI's "Decemberunderground" has opened the band to the mainstream.

Since their first appearance here at the DNA Lounge in 1999, San Francisco has been home to VNV's most devoted fanbase. This show will likely sell out, so get your tickets now! 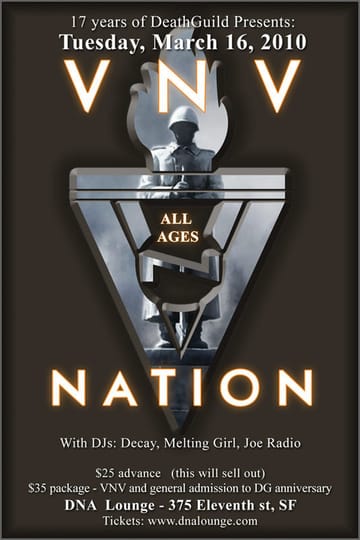