Album release party for Ejector's debut album "On The Pages".

Special CD for the first 25 people!
Ben Holder and Ricky Terry, known together as Ejector, have been electrifying audiences with their throbbing synths, soaring vocals, and edgy latex, leather, and glitter garb, for the last two years. Now they release their debut album, On the Pages, along with two new music videos that show the pair performing in all of their theatrical and sometimes controversial glory.

On The Pages features 10 tracks of sonic stimulation that Ejector promises will push buttons and boundaries of electro-pop limits. According to Holder, "Each song tells its own story with influences coming from film, television, and theater and musical genres ranging from 70s disco, to 80s dance to experimental nu-rock." 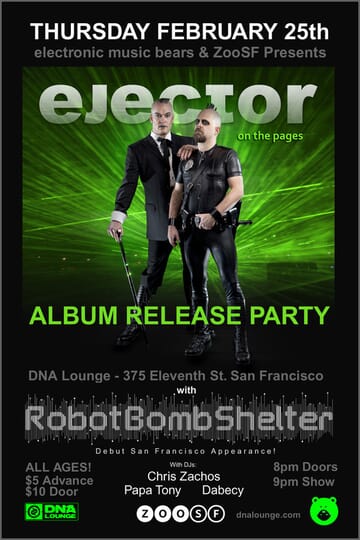