A vs. D: Bootie's mashup couple goes head-to-head in a fierce DJ battle set!
A Plus D
Opening DJ: Dada

Free mashup CDs to the first 100 people through the door!
They may be Bootie's mashup couple, but for this special post-Thanksgiving party, it's going to be "A vs. D," as resident DJs Adrian & the Mysterious D go head-to-head in a fierce DJ battle set! Live mashup band Smash-Up Derby hits the stage at 11 PM. In the upstairs room, Electro-Bootie -- our monthly "club-within-a-club" featuring electro bootlegs, remixes, and covers -- presents Future Universal, with DJ Mykill and F.U. DJs Kidhack and Mario Muse. And for the Midnight Mashup Show, Monistat returns to the Bootie stage to perform "Downtown Murder." 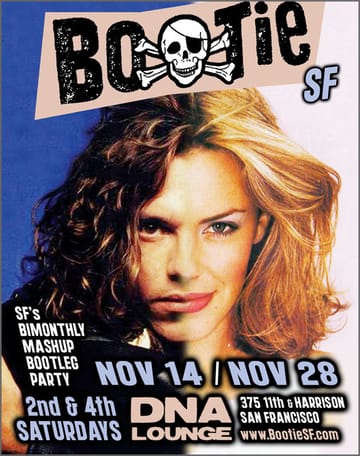