If your band would like to participate in a future Battle of the Bands, contact Gorilla Music!
Black Friday, Jimi Hendrix's Birthday, and Stereo Freakout's debut CD release party!

SFO plays a blend of hard rock and funk with splashes of jazz, metal, ska, and slap guitar. Big influences are Primus, the Red Hot Chili Peppers, Tool, Alice in Chains, Faith No More, the Police, and King Crimson, just to name a few. Songs range from funky and danceable one track to heavy, rocking and driving the next. Songs like "The Way" blend a rocking intro with heavy slap-bass coupled by a lyrical vocal flow, while "Black & Blue" captures a laid-back leisurely groove with a heavy and melodic chorus. "Break Me", one of SFO's heaviest numbers, spotlights the incredible and almost unbelievable finger prowess of Mike Sopko, allowing him live to traverse an intense musical journey that sets the audience's heart racing and is never the same twice. Bassist Ethan Rider's driving funk and jazzy lines, "Infamous" Dave Jones pounding and original rhythms, and vocalist/rhythm guitarist Jym Murry's slap-guitar antics and interesting vocal stylings make this band one of the newest Bay Area sensations and acts not to be missed! Also appearing tonight will be Sam Johnson from local bands Paradise and Handsome Rovers to make this show extra memorable...

Since winning the Gorilla Productions Battle of the Bands Finals in June 2009, the Cleveland-based company is headlining SFO for this 10 band, all-ages showcase. Nuck Fu, the funky/rockin' highschoolers from Berkeley co-headline the night, and this will apparently be their last and farewell show as "Nuck Fu"... Hope to see everyone out for this incredible gathering of local talent! 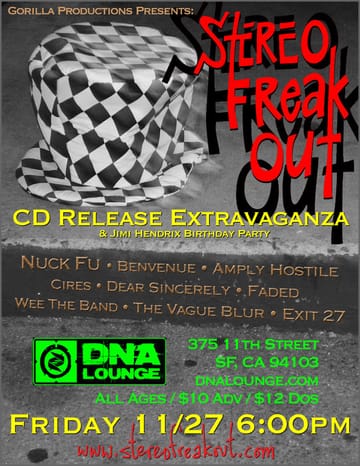