Intoner (Death Guild)
Crxckwhxre
Venetian Snares will be performing live and djing, this being the 1st live Venetian Snares tour ever! Venetian Snares is the main performing alias of Canadian electronic musician Aaron Funk. From Winnipeg, Manitoba, Canada, Funk is known for making electronic music often in odd numbered time signatures (mostly 7/4). His style has been critically acclaimed, notably by the late British radio disc jockey John Peel. Venetian Snares is said to have reinvented breakcore and set the stage for many other artists such as UndaCova, Xanopticon, Enduser and Datach'i. In a February 2003 interview, Funk was asked a question regarding the diverse mix of genres he draws upon in his music, a property which the interviewer labelled "eclecticism". Funk replied: "I prefer to call it Surrealism."

Volume will be worshipped! 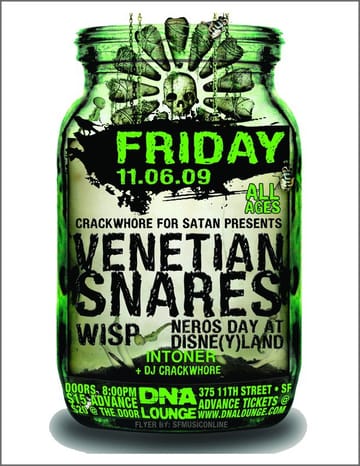