Rob Metal
What kind of introduction could possibly do justice to the most influential grindcore / death metal band of all time? Repulsion is the band that introduced the world to insane blasting drums, bone jarring distorted bass, and the most vile lyrics imaginable.

Repulsion formed in 1985 under the name Genocide in Flint, Michigan. Originally influenced by bands such as Discharge, Celtic Frost / Hellhammer and NWOBHM music, the classic line up of Scott Carlson (vocals, bass), Aaron Freeman (guitar), Matt Olivo (guitar) and Dave Grave (drums) recorded the legendary Stench of Burning Death demo in January, 1986. Released to a tremendous response, Stench of Burning Death quickly spread throughout the underground, and helped gain Genocide / Repulsion a static following of fans of intense music with horror-inspired lyrics, a sub-genre of underground music that was still in its infancy. It was this foundation that ultimately became the basis of what is reknowned today as "grindcore". In every respect, Genocide were among the first wave true pioneers of this style of music, if not the innovators. 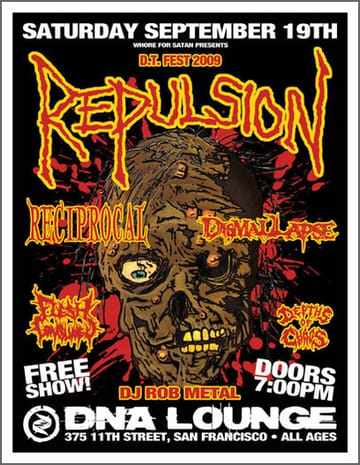 Repulsion: Maggots in your Coffin
2010 Best of the Bay:
"Best Whore for Satan"
Past related events: