Resident DJs:
A Plus D
Dada

Free mashup CDs to the first 100 people through the door!
For the first time ever, Bootie does Twitter Request Night! Follow @clubbootie on Twitter, and twit your requests to Adriana A and Mysterious D by mentioning @clubbootie. Plus, everyone's back from Burning Man! So in the upstairs lounge, Bootie BRC DJs Malderor and Mad Murdock return to the decks with playa-inspired sets. At 11 PM, award-winning house band Smash-Up Derby presents "Guest Singer Night," with various guest vocalists joining the band. And for the Midnight Mashup Show, Virginia Suicide makes her Bootie debut by singing a live Whitney Houston mashup! 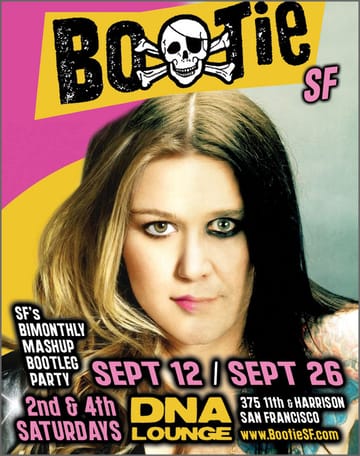