Vis-à-Vis.
Beats by:
DJ Dupuy
Trannyshack, SF's infamous drag performance night club, shocked and delighted packed audiences every Tuesday night for over twelve years. Defying all expectations, Trannyshack incorporated everything from low brow trash to high brow performance art, and became famous (or infamous) worldwide as the quintessential SF experience. No visit to the City was complete without a stop at Trannyshack. The club has been featured in Out (which named it one of the top ten reasons to move to SF), Genre, Instinct, and Paper magazines and won numerous Best of the Bay awards, and was filmed for an independent feature length documentary, titled "Filthy Gorgeous: The Trannyshack Story". Trannyshack is now branching out it's empire, with shows in LA, London, Waikiki, Seattle, Portland, New Orleans, and Reno enjoying great success. 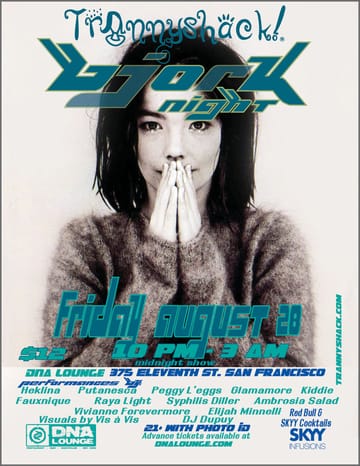 Heklina with Glamamore: All is Full of Love
2014 Best of the Bay:
"Best Drag Show"