A Plus D
Dada
Spinning classic mashups from the past six years!

Free 20-track Bootie Anniversary CDs to the first 500 people through the door!
Bootie celebrates six years of mashing it up, with a party so big, it can't be contained in one night! It's the Bootie 6-Year Anniversary Weekender! Friday kicks things off with "School Night," as DJs Adrian, Mysterious D, Boyshapedbox, and Dada spin classic mashups from the past six years. At 11 PM, class is in session as live Bootie house band Smash-Up Derby presents "Mashups 101: A Bastard Pop History Lesson." Complete with a slide show, the band will trace the chronology of the mashup scene's most landmark tracks, from 2002's seminal "A Stroke of Genie-us" to the multiple mashed-up versions of "Smells Like Teen Spirit."

Blow Up -- named one of America's hippest indie dance parties by Spin magazine -- takes over the upstairs room, with local DJ heroes Jeffrey Paradise and Richie Panic spinning the best indie and electro on the West Coast. At midnight, Bootie LA's resident 10-person dance crew R.A.I.D. (Random Acts of Irreverent Dance) will take the stage in their trademark gold suits, with a trio of choreographed mashup dance numbers. There will also be surprise drag queen performances by Suppositori Spelling and Renttecca, as well as naughty schoolgirl and schoolboy go-go dancers presented by The Indra. And of course, there are free 20-track Bootie Anniversary CDs for the first 500 people through the door! 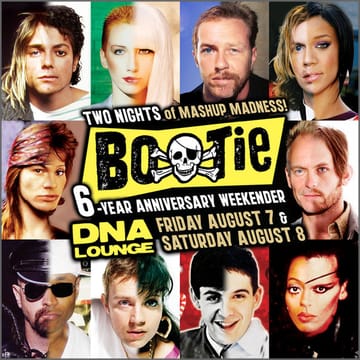