We are sorry report that due to visa problems, Marduk will (probably) not be performing.
1984: Norway, suicide, church burnings, murder, curse, evil, black metal, originators, godfathers, infamous, desecration, arrest, drugs, ugly, necro, hell, blasphemy and Hungarian demons. Despite numerous line-up changes due to circumstances mentioned above, the essence of darkness is present and has never been stronger.

Norwegian black metallers Mayhem will celebrate their 25th anniversary by teaming up with some of the strongest extreme metal acts for a tour of North America in May and June, dubbed the Blackenedfest! 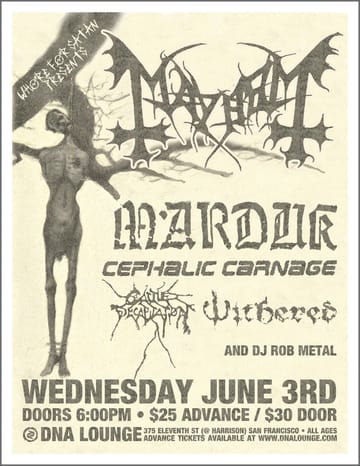