Rob Metal
Although Sweden's General Surgery has been recording and releasing music since 1990's Erosive Offals demo, March of 2009 sees the release of only their second full-length album, Corpus In Extremis: Analysing Necrocriticism.

Since the three-song Erosive demo was released, General Surgery has puked up numerous demos, splits, and EPs, including the classic Necrology 7" on Relapse in 1991, and like most long-running bands, they've had their fair share of lineup changes, including appearances from members of fellow Stockholm residents Regurgitate and Dismember.

General Surgery's burst-of-releases-followed-by-periods-of-inactivity regimen ended with their first-ever North American show at the 2005 Maryland Deathfest and their debut album, 2006's Left Hand Pathology. The title - a nod to classic Swedish death-metal band Entombed and augmented with their Carcass-loving medical twist - perfectly sums up General Surgery, and Corpus In Extremis continues down that same scalpel-littered road with no anesthesia in sight. 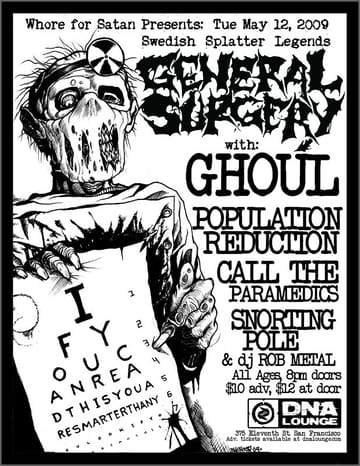