Ceremony
Soul Control
Never Healed
Grace Alley
Street Walkers
"Ceremony is hateful and unrelenting hardcore/punk from California. Ceremony formed from several mid-level (in notoriety) hardcore bands in the Bay Area a couple years back, and have since transformed themselves into one of the most promising hardcore bands in years.

"If you're still out of the loop, Ceremony plays hardcore stylistically similar to early acts like Negative Approach and Black Flag, or more recently, Unbroken. What the songs lack in length they make up for in intensity. And even though the songs aren't written in style of much of today's hardcore, there are plenty of opportunities to sing-along. In fact, "You're all the Same" and "Throwing Bricks" are just that, entire songs as sing-alongs." -- Scene Point Blank 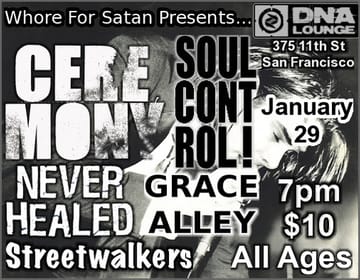