Decay (Death Guild)
Joe Radio (Death Guild)
Pummeling dancefloor grooves and distorted beats combined with scathing vocals and electro arrangements produce a full-tilt dancefloor onslaught. The new Combichrist album is a must for all lovers of the harsher, more noisy and danceable stuff. Expect world domination with their upcoming album, What The F*&&#36 Is Wrong With You People? (Metropolis Records / Out Of Line).

"Black Light Burns is former Limp Bizkit guitarist Wes Borland's new project that also features former members of A Perfect Circle, Nine Inch Nails, and Methods of Mayhem. Black Light Burns' overall sound is closer to that of Nine Inch Nails than anything ever put out by Limp Bizkit. The computerized notes on many songs on the album are at times reminiscent of Stabbing Westward or even She Wants Revenge." --Tunelab 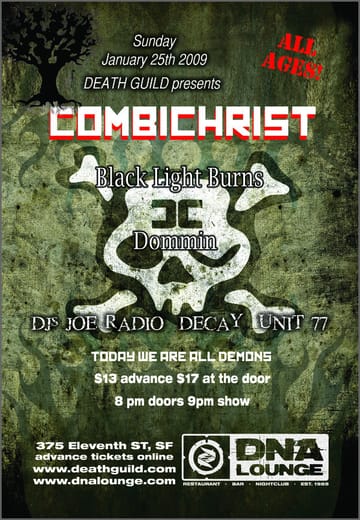 Combichrist: Get Your Body Beat
2020 Best of the Bay:
"Best Dance Party"
Past related events: