Free mashup CDs to the first 100 people through the door!
Tonight, the world's FIRST bootleg mashup club meets the world's BIGGEST bootleg mashup club! From London, Bootie is proud to present Cartel Communique, the duo who created Bastard, the first club night in the world dedicated solely to sampled material and "bootlegs" (as mashups are called in the U.K.). They'll be spinning a showcase set on the main floor, as well as taking over the upstairs room. And for the midnight mashup show, Dam Dyke, Dean Disaster, and Emily Estranged return with an encore performance of their epic Super Mario Bros. vs. Nine Inch Nails performance, "Closer To Mario."

Resident DJs Adrian, the Mysterious D, Party Ben, and Dada keep your brain guessing and body dancing with creative song combinations, celebrating -- and satirizing -- the many different forms of music. Guest mashup DJs from around the world are featured, and the infamous midnight mashup show showcases popular local drag and burlesque performers. 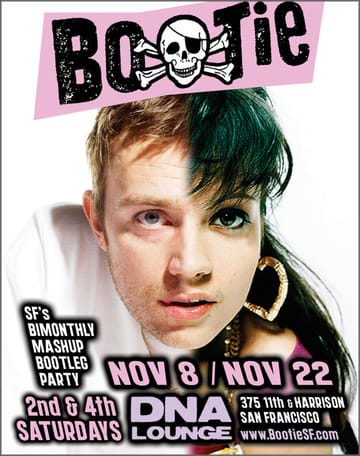