DJ Quik (performing live with full band)
Saafir (Hobo Junction)
Sincere (Ineffable Records)
Fresh
Mavrik
Party starter, cult favorite, emcee and producer, DJ Quik hits the stage Lounge for a live band show! This is his first since a highly acclaimed tour in 2005. Since the Platinum selling Quik is the Name hit stores in 1991, DJ Quik has carved a well defined and respected niche in the rap game.

In the early part of his career, Quik scored big with singles Tonight, Born and Raised in Compton, Way 2 Fonky and Let's Get Down (collaborating with Bay Area R&B luminaries Tony, Toni, Tone on the latter). He has produced tracks for some of hip hop's greatest icons, from Tupac and Snoop Dogg to Talib Kweli and Jay-Z, and he has earned a slew of Billboard Music Awards in the process. He drew his inspiration heavily from soul and funk, including Roger Troutman of Zapp and ultimate funkateer, George Clinton. 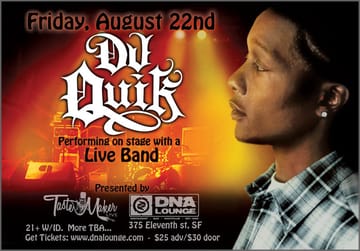