MC Chubbs
DJ Ace
Even if you haven't grown up surrounded by it, you recognize the sound. Jawaiian or island music has come a long way since its beginnings in the late '80s and early '90s. Its fusing of contemporary Hawaiian singing style and instrumentation of Jamaican reggae rhythms, Jawaiian Music has become the sound of three Honolulu radio stations and Hawaii's most profitable music scene.

As a hot contributors of Jawaiian music, alongside with Hawaiian and Reggae melody, Three Plus is currently one of Hawaii's very own favorite bands. Since taken the Hawaiian islands by storm since 1992, Three Plus is concurrently in high rotation with the local stations in Hawaii, Japan, Guam, and the U.K. They are a highly energetic group that consist of men that have come together through their love of sports and solidified with the love of music. 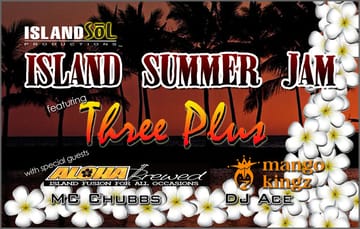