We got an early birthday present: on Sunday morning, someone broke into the club and stole a whole entire ATM. They were interrupted by the arrival of our janitorial staff, but in the meantime they managed to fairly quickly trash the floor, angle-grinder away some bolts, and load it out.

As far as we can tell, they picked the lock on the door (maybe with a pick-gun or bump-key), since the door and lock were undamaged, but the cylinder was turning freely. Which is frustrating, because that's hard to defend against by just bolting some more steel plate to the door.

However, lest you get the wrong idea, this guy was no Moriarty. We've got lots of video of his face, and can clearly hear him talking on the phone to his getaway driver, Kayla, who was waiting out front in a black Mercedes. If you recognize this guy, both we and SFPD (case 220800244) would sure like to know: 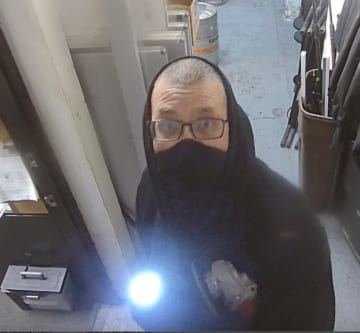 Adding insult to injury, that particular ATM had been broken (and empty) for about a month. We only just got it repaired like three days before.

They also tried to break in to the scooter shop across the street, before paying us a visit.

Maybe now is a good time to remind you that we have a Patreon and a one-time donation page?

Also, today is the anniversary of the Max Headroom Broadcast Signal Intrusion Event, so here's wishing a happy Max Headroom Day to all who celebrate.