Well, that took two weeks, but we have toilets again. It took a while to find a plumber who was both willing and able to do the work, since this involved quite a lot of excavation. To speed things up we even did a bunch of work in parallel, starting the process of getting permits and approvals on our own before having the contractor. When you need to get those "call before you dig" summoning glyphs drawn onto you sidewalk there are like six different city departments who have to come out and cast the runes. Then the contractor says, "Oh, you're excavating a sidewalk and that sidewalk is a bus stop? Ohhhhhh.... Hmmmmmm... Dealing with MUNI is a whole other thing..."

Pictured here are the wards and summoning grids, or at least the first batch of them. I think more may have been added after this photo was taken. If anyone can translate those, I'd be curious to know what they say.

Since everything in our neighborhood is built on top of sand and the burned lumber of earlier civilizations, excavating anything is a challenge; you need to shore up the sides or the sand just spills right out. 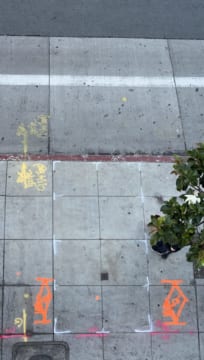 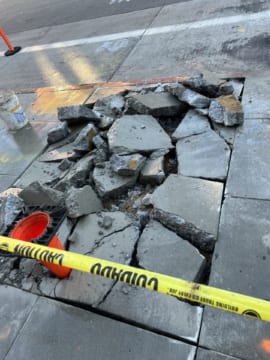 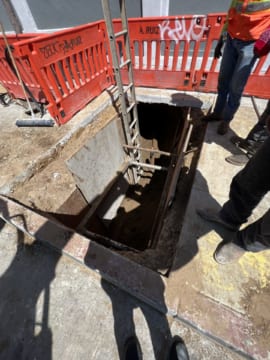 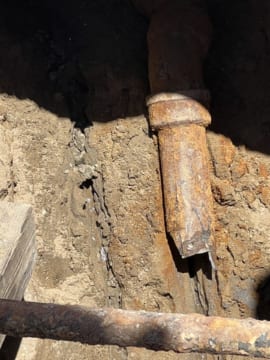 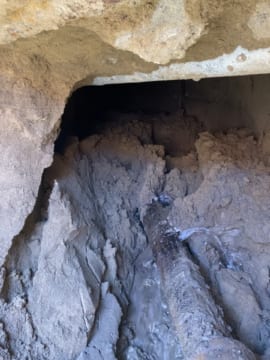 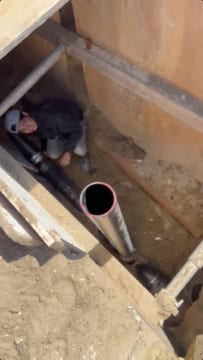 So that meant they had to extend the hole (tunnel, really) all the way to the front wall of the building. So now something like 6'x6'x10' (360 cubic feet) of sand and dirt had to come out, and then go back in. "Son, what's your dirt doing in Boss's hole? Well git it out!"

This vertical pipe is the new sidewalk-accessible clean-out port that connects near where our 6" lateral meets the 36" sewer. This is where you insert the power snake when the floor drains start poopin'. It's closer to the curb than the old one, which was right in the middle of the sidewalk. It was there because that had been the curb line back before our sidewalk was widened from 6' to 12' back in 2016.

Aside from the fact that the lateral was leaking into the sand and turning to dust, the contractors also described that old pipe as "a Mikey Mouse crazy-straw". Apparently the various and sundry history of work on this line had resulted in it having a bunch of unnecessary 45° and 90° turns in it, with the obvious impact on clogs and snake-ability. So they straighted that out while they were at it, to make it more of a poop slip-n-slide and less of a poop obstacle course.

Anyway, this latest surprise disaster cost us somewhere in the neighborhood of $25,000. And it's not like we had the option of saying, "Nah, that's too much, let's just not have toilets." Won't you consider a donation to the DNA Lounge Adopt-a-Sewer program? We thank you for your support and Poseidon thanks you for your tribute.