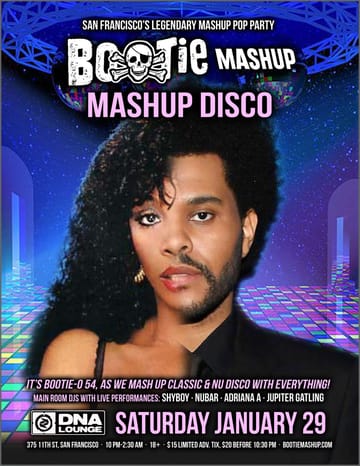 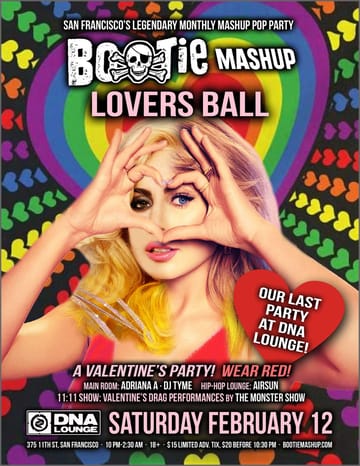 I am sorry to say that Saturday, Feb 12 will be the final Bootie at DNA Lounge. There's one more remaining before that, this Saturday, Jan 29.

Bootie began as a monthly party at Cherry Bar (formerly Covered Wagon, later Codeword) in August 2003. They first joined us here at DNA Lounge in February 2005, when they began hosting the Lounge during our monthly Pop Roxx parties. Then, having outgrown Cherry Bar, Bootie moved to DNA Lounge as a monthly party starting in March 2006. It was an immediate hit, doing impressively higher numbers than the tiny CW room had allowed. By February 2008 we expanded it to twice a month, then to weekly in October 2009, and eventually to four rooms in October 2012.

Bootie was more than just another DJ dance party; every event included a hugely varied cast of underground and alternative performers -- drag, burlesque, aerialists, circus arts. At the height of its power, Bootie was not only giving those performers access to a huge audience that would otherwise be inaccessible to them, but it was also exposing that audience to a wide variety of performance art that many of them had never seen before. And that's a public service. At every event, you could look down at the crowd at the edge of the stage and see a bunch of faces looking up in amazement, with "what the fuck am I even seeing right now?" written all over them.

For many years, it was far and away our most successful event. Bootie was what paid the bills and kept the lights on. When other events were slow, or there was a bad month, at least there was Bootie. In fact, Bootie's great attendance in the 2010-2012 era was a contributing factor to our decision to expand into next door and open DNA Pizza and Above DNA: we needed the space!

But, what goes up must come down...

We started getting concerned about Bootie's attendance around 2017, and we tried a bunch of different things to reverse the trend. We switched it to 18+, and then we began spending a huge amount of money on promotion, not just online advertising but also getting posters and flyers wayyyy out into the suburbs. Our thinking was, "It's a pop party on a Saturday. If people aren't showing up, it's because we aren't reaching them."

Though, to me -- and not all of our team agree with me on this -- one of the biggest red flags was when we reached the point where half of the people coming in immediately asked our staff, "Where's the hiphop room?" They came to Bootie, but they weren't here for Bootie. What they wanted to hear was exactly the same music you can hear for no cover at every corner bar in town, or any town. And they sure had no interest in seeing a drag show. What made Bootie unique wasn't what drew them to us: they were here just because it was a Saturday. The "community" aspect of the party had faded.

Anyway, that aside, our big promotional push actually seemed to be working! In mid- to late-2019, our Bootie attendance numbers began trending upward again...

And then, oops, pandemic. And it never really recovered.

Now obviously everything has sucked in 2021 and 2022, across the board, but even in comparison to our other events, Bootie was in the ICU. So, it was time for it to stop being weekly. We hoped that it could recover as a monthly, and we were planning on giving that a shot beginning next month. But, Adriana decided that instead of continuing at DNA as a monthly, she'd rather find a smaller room and take Bootie to another venue. We wish her the best of luck.

It's a bummer, and we will miss Bootie, but 16 years (or 19, depending on how you count) is an incredibly long lifetime for a party. It is nearly unprecedented.

We hope to see you at those final two parties! Masked and boosted.