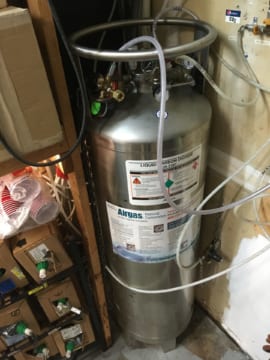 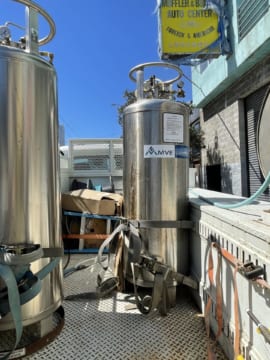 We had to replace our big CO2 tank. It had a slow leak, which was costing us money, and so we had been using smaller rental tanks instead of the big one for quite a while, which was also costing us more money. And Airgas had been pretty unreliable about those deliveries; it seems that the schedule that they are comfortable with is, "we'll probably fill up the big tank from the street on our own schedule sometime within a six week window". Anything other than that, and they could hardly be bothered. We often had to drive down there and pick up tanks ourselves at the last minute. Like animals.

The leak was somewhere in that maze of pipes and valves bolted onto the top of the tank, rather than the tank itself, so you'd think that they could just un-bolt that octopus and bolt on a new one. But apparently their policy is, "Fuck that, buy a whole new tank." I'm like 90% sure we're being ripped off, but on the other hand, they probably have more experience with tanks full of 500 pounds of liquid CO2 exploding, so what are you gonna do.

This is the exciting nightclub content that you are here for.