ABC is trying to eliminate due process, and make it so that they can unilaterally shut down bars, nightclubs and restaurants on the tiniest pretense, without trial or any realistic hope of appeal or recourse. They are using COVID as cover for this, but it's simply an unrelated, brazen power-grab.

In what beverage attorneys are calling a potential repeal of due process, the ABC is trying to implement a new emergency regulation that would allow any outlet to be shut down without a right to a trial before hand.

John Hinman, a San Francisco-based partner in the law firm of Hinman & Carmichael LLC, says the new regulation is[being pushed forward with Covid being used as an excuse for its implementation. He and several other attorneys don't think that communities need any more "protection," from on- and off-premise establishments than prior to the pandemic. [...]

The Proposed Rule sweeps much more broadly, establishing a general-purpose guillotine the department may wield against any licensee who violates any provision of law during a declared state of emergency," shares Ralph Saltsman, a partner at the Playa Del Rey, California-based Solomon, Saltsman and Jamieson legal firm.

Hinman compares this regulation's presence on the books to punishment before due process. With the new regulation, businesses could be shut down without a right to a trial. They are also likely to stay closed for the period leading up to one, which could push many smaller operations beyond their financial comfort zones.

From Hinman's blog, where he has been writing about this and other ABC shenanigans for quite some time:

Hearings for all violations subject to "emergency orders" would occur only if the ABC agrees to hold a hearing, the licensee could appear "if practicable" and discipline (license suspensions and revocations) would be imposed immediately. The new rules do not go away if the COVID 19 "emergency" goes away. From now on an "emergency" is anything the ABC says is an "emergency." [...]

The ABC is using the COVID 19 crisis as an excuse to implement a system of permanent "emergency" orders that would abrogate licensee rights to defend themselves and their licenses in administrative proceedings. 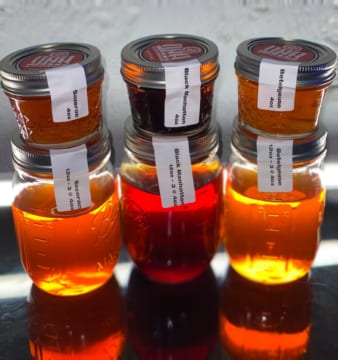 I know that this month has been quite a year, but it was only last month that there was the report about ABC running a sting operation where they shut down random restaurants because of mistakes made by Grubhub and not the restaurant.

They are monsters. They are an abusive gang of thugs, propped up by prohibitionist, fundamentalist nutjobs like The Marin Institute and MADD, and are actively hostile to everyone in the industry that they supposedly regulate.

It's as if the Egg Council had a nakedly anti-egg agenda.

All that being said, please order our cocktails!

Pictured above: the Sazerac, Black Manhattan and Betelgeuse! They are delicious, and available for pick-up and delivery from DNA Pizza, every day from 4pm to 10pm.