<< 16 May
29 May >>
DNA Sequencing
with your host
Jamie Zawinski
26-May-2020 (Tue) Wherein the bars are dropping like flies, and there are new ABC shenanigans. 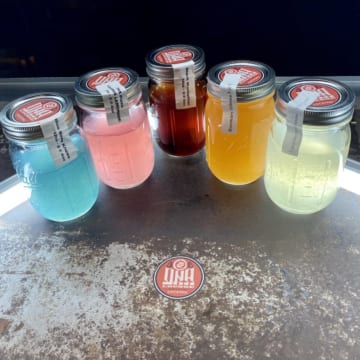 Look at our beautiful cocktail jars! Why don't you stop by and take some home with you? I added the full menu of all the cocktails our Liquor Scienticians have been developing for you.

Remember, if you pick them up instead of having them delivered, the delivery services don't take their 15% pound of flesh from us. Call ahead! 415-626-0166.

You've probably heard that The Stud is closing, at least for the foreseeable future. Here's a good article about it, with a nice history of the place:

Stud Stories: Remembering a Bar That Epitomized Everything Great and Weird About San Francisco

The place has been living on borrowed time -- albeit very creatively -- for about four years. Things have been uncertain ever since the previous owner sold the business when facing a steep rent hike, and it became clear that the offspring of the now deceased original property owners intended to develop the site or sell it for development and profit handsomely. (In recent years, the gargantuan L7 apartment complex rose next door to Stud's tiny edifice on what had for decades been a surface parking lot for Muni and Golden Gate Transit buses, and the image began to feel like one of those cinematic fast-forwards about gentrification.) The Stud Collective, recognizing this, began hunting for a new space in 2016 even as they got one and then another two-year lease from the property owners.

Given that their current location wasn't going to last much longer, it makes total sense for them to stop paying rent on an empty building now, and save that for their new location instead. Still, it's sad.

In these last few weeks DNA Lounge has had it slightly easier than many of our fellow bars and clubs because we are also a restaurant. Venues that are 21+ have, so far, been prohibited from doing any business at all. Though we're allowed to deliver liquor and our delicious cocktails, that's only in conjunction with a food order.

Well, this week, bars are allowed to start delivering cocktails, but ABC is demanding that they sell food, too. Which is a pain in the ass if you are not a restaurant, and do not have a kitchen.

The announcement allowing bars, wineries, distilleries and breweries that do not have their own kitchens but that partner with meal providers to sell alcoholic beverages to-go was made Friday by the California Department of Alcoholic Beverage Control.

Dalton owns Future Bars, which has about a dozen locations in San Francisco. He says pivoting his business model to suddenly partner with restaurants or food vendors is an undue burden and logistically challenging. He wants the city and ABC to go a step further, and relax the meal requirement.

Though we were all shocked, and pleased, to learn that ABC was going to allow us to sell to-go alcohol, never forget that this agency is no friend of the industry that they purport to be regulating. Their idea of "regulate" almost always most closely resembles "destroy".

ABC is currently ramping up a set of sting operations where under-age people try to order alcohol. And simultaneously, they are in the process of changing their rules so that if you fall victim to that sting, you lose your license with essentially no hope of appeal:

Booze Rules: The Latest on the ABC Emergency Rules

The new "rules" do away with most due process protections for licensees including discovery of relevant evidence, responsive pleadings, time to prepare for hearing and mandatory live administrative hearings before license suspension or revocation being imposed. [...] The new rules do not go away if the COVID 19 "emergency" goes away. From now on an "emergency" is anything the ABC says is an "emergency." [...]

Now the ABC wants to Include the Use of Minor Police Employed Decoys as "Emergencies" justifying the suspension of due process protections.

On May 20, the ABC upped the ante on the new emergency regulations by including a new category of offense in the emergency rules -- sale to a minor employed by the police as a decoy to accept alcoholic beverages from a delivery driver acting as the "agent" of the selling licensee. [...]

Given these violations are also criminal violations for the delivery person (which could be any of the delivery services, including FedEx and UPS) this may bring the current work around of delivering alcohol to a screeching halt. I cannot imagine the major delivery services agreeing to carry alcohol when doing so exposes them and their drivers to criminal liability for not carding someone wearing a mask because of COVID 19 concerns and requiring the driver to leave the package on the front porch. [...]

The ABC is using the COVID 19 crisis as an excuse to implement a system of permanent "emergency" orders that would abrogate licensee rights to defend themselves and their licenses in administrative proceedings.

ABC's goal is not "regulation" of the alcohol industry. It is the destruction of it. The agency grew out of Prohibition, and they have not changed.

Taking advantage of a pandemic to push through onerous new "emergency" powers is as repulsive as it is unsurprising. Into every plague come the plague rats.