<< 26 Apr
6 May >>
DNA Sequencing
with your host
Jamie Zawinski
1-May-2020 (Fri) Wherein it's May Day, and that means there's no better day to shame billionaires

First up: the government of Saudi Arabia now owns almost 6% of Live Nation / TicketMaster, a half billion dollar investment.

The Saudi Public Investment Fund is now the company's third-largest shareholder, with John Malone's Liberty Media the largest individual shareholder with a 33 percent stake. [...] Many firms have been reluctant to take investment from the fund following the murder of journalist Jamal Khashoggi in October 2018.

That would be the Saudi Public Investment Fund overseen by Crown Prince Mohammad bin Salman, darling of Silicon Valley, who is widely believed to have personally ordered that Khashoggi be kidnapped and dismembered alive with a bone saw.

Live Nation, again, is the multinational behemoth that sells 80% of all tickets in the US, and owns 117 venues and exclusively books 33 others, including The Fillmore, The Masonic, Cobb's, Punch Line and August Hall.

San Francisco has 75 billionaires. Most of them aren't donating to local COVID-19 relief.

Mayor London Breed set up what she called the Give2SF COVID-19 Response and Recovery Fund, and started asking for cash. [...] It hasn't worked. As of late last week, the Give2SF Fund had received a total of $10.5 million in donations, according to Mayor Breed's office, an order of magnitude less than the anticipated need. [...]

Dorsey isn't unique among San Francisco's nine-zeroes club. If there are 75 billionaires in San Francisco, close to 70 have yet to fork over a dime to COVID-19 relief. Dorsey's local parsimony is the standard.

In an unprecedented time of unprecedented need, with unemployment projected to top 20 percent and housing displacement estimated to exceed the nadir of the Great Recession, the crop of billionaires created during the past decade in San Francisco -- many of them, like Dorsey, the beneficiaries of generous tax breaks from the city -- have chosen to hold onto their fortunes.

Dorsey got a bunch of fawning, gullible press recently reporting that he had "donated $1 billion" but that's not at all what he did. What he did was shift $1 billion of his money into a new corporate shell, owned by him, that will be a part of the privatization of services that the government should provide.

What Dorsey did was move approximately 20 million shares of Square stock, worth more than $1.26 billion at current market value, into his charitable LLC. A philanthropic technique popular in Silicon Valley, charitable LLCs escape reporting requirements and also allow money to be spent on lobbying -- or investing for profit, as critics point out. [...]

A few hundred million dollars in donations would represent less than 1 percent of the fortune of 75 billionaires. This would be money that San Francisco would not have to cajole out of its feudal overlords if they were taxed. The ability to dodge such taxes is something Jack Dorsey is more than happy to pay for. [...]

Again, this is not to single Dorsey out for being venal. He has company. Other donors who ponied up to defeat Proposition C in an effort to avoid paying taxes and who haven't seen fit to dish a dime to COVID-19 relief include Levi Strauss, the San Francisco Giants, Charles Schwab, Instacart, and the Chamber of Commerce itself.

Incidentally, DNA Lounge has applied for both the Payroll Protection Program and SBA Economic Injury Disaster Loans, on just about the day that those started taking applications, and so far we've gotten $0, like so many other struggling small businesses.

Ruth's Chris Steak House got $20 million, though. They had a profit of $42 million on revenue of $468 million last year. Cool, cool.

So what I'm saying here is, Smash The State, and Join Our Patreon. 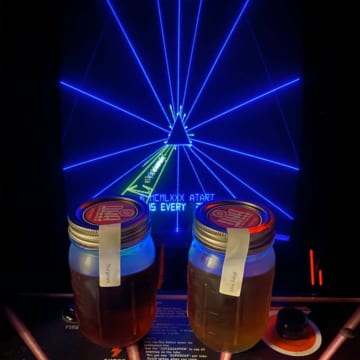