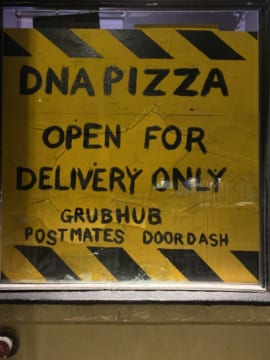 A staffer was leaving to catch the bus and one of our local street vermin came up to ask for hand sanitizer. When they didn't have any, he started screaming "YOU HAVE SHIT ON YOUR FACE" and other incoherent nonsense. They retreated and closed the garage door to wait it out, and the shambler somehow found some rocks to throw at the window until it broke.

So that's hundreds of dollars right there. (It's a very big piece of glass.)

We had put the plywood on the inside of the window instead of the outside because that was a lot easier (drilling into wood instead of into concrete) and because we were more concerned about robbery than vandalism. But clearly that was the wrong call.

This is why we can't have nice things. Or even shitty, halfassed things.

Did you hear that a few weeks ago some jerk tried to steal Lucky 13's sign?