<< 4 Apr
22 Apr >>
DNA Sequencing
with your host
Jamie Zawinski
17-Apr-2020 (Fri) Wherein we got some press, and I have a few things to say about the delivery services. 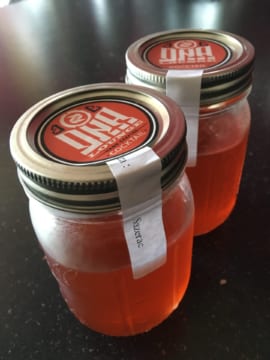 Charles Lewis III wrote a very kind article about us in The Examiner today:

"DNA Lounge is really a vortex for a lot of disparate Bay Area communities," said artist and journalist Larissa Archer. "It's one of the few places left in San Francisco where tech bros are outnumbered and are clearly not the target audience, yet DNA and its denizens welcome them and lets them be -- like we wish they'd do for us." [...]

Like the rest of the world, Zawinski isn't sure how things will play out once the pandemic ends. Nevertheless, local musicians remain optimistic that they'll grace a DNA stage again. Sophia Prise, who played the inaugural StarCRASH in January, is one such musician who isn't ready to see the Lounge disappear.

"The scene there is downright iconic: from the line wrapping around the club earlier on some nights to music fans of all stripes uniting at the adjoining pizza shop to get some late-night grub," she says. "We have had some of our brightest, most unpretentious music memories made there, and the culture isn't just novel; in my opinion, it's necessary."

We are fortunate that we are also a restaurant, so at least we have a tiny bit of income during the lockdown. Please help us out by ordering delivery from us! Pizza, sandwiches, liquor and delicious pre-mixed cocktails...

Amid the pandemic lockdown, food delivery apps have been raking it in. But seeing San Francisco restaurants laying off workers and struggling to stay even barely afloat, Mayor London Breed -- at the urging of the Board of Supervisors -- has passed an emergency order that temporarily limits how much these apps can take from restaurants in commissions.

Commissions from delivery apps range from 10 to 30 percent, potentially wiping out any profit that a restaurant might make from a delivery order. And with less than half of San Francisco's restaurants remaining open for takeout and delivery, this means that many of the orders local residents are making in the hope of supporting local businesses are actually lining the coffers of companies like GrubHub and DoorDash. [...]

Some of the delivery companies, in order to encourage more food ordering, having been waiving delivery fees on the customer side. But they've been able to afford to do this by continuing to charge commissions to struggling restaurants -- which they charge even when customers place orders through the apps for pickup. [...]

GrubHub made an announcement as the lockdowns began that it was waiving commission fees paid by restaurants up to $100 million -- though the company later clarified, in arguably shady fashion, that the fees weren't so much being waived as they were being deferred, to be still owed at a later date.

I really have my doubts about whether this 15% cap is actually going to work, though, because these companies are excellent at obfuscating their fees and finding loopholes.

For example, looking at our latest invoice from GrubHub, they charged us: 17.5% "commission", 7.7% "delivery commission", and 3.24% "processing fee". And on top of that, we discovered that nobody was able to even find us on their site unless we also spent a few hundred bucks on "targetted promotions". Without that, you don't even show up in the search results.

One of the bullshit things they did recently was push some "savings for supper" program where they encouraged you to agree to give people $10 off an order of $30 or more. But if you read the fine print, they didn't split the cost: it was just an amazing deal where the restaurant got to unilaterally give up another $10 off their already super-slim margins. What a bargain!

A proposed class action lawsuit filed Monday in New York claims that diners have been paying too much for meals delivered by Bay Area-based apps like DoorDash, Postmates, and Uber Eats. The suit contends that the companies are engaging in "anticompetitive conduct" and are acting as "monopolies" that could eventually kill the restaurant industry as we know it.

According to the suit [the food delivery apps] charge customers and restaurants fees that "are shocking when one considers how little value [they] provide to restaurants and consumers" as they "merely offer a list of local restaurants that can easily be found on Google or Yelp for free."

The best way for all of us, customers and restaurants alike, to avoid being gouged by those companies is for you to call us on the phone (415-626-0166) and place an order for pick-up. Not that I really expect people to do that... Nobody hates talking on the phone more than I do!

In other pandemic klept news: TicketBastard gonna TicketBastard: "Ticketmaster has quietly changed its refund policy to cover only canceled events -- not the many functions that promoters have indefinitely 'postponed' or rescheduled to a date/time that some ticketholders cannot make."