The pizza oven had been being a pain in the ass for a while because (it seemed) that the "light the pilot light" button was gummed up, and this cause the oven to occasionally revert back to the low-gas-flow mode used for lighting the pilot, meaning it would suddenly stop being hot enough. Since it holds heat for a long time, this exhibited itself as someone noticing halfway through the night, "Hey, why aren't the pies cooking like they used to?" We had a repair guy come look at it and several times he jiggled the button and said, "There, I fixed it." When we said "that's not a fix" he rolled his eyes and said, "Whatever loser, I'll be back in a few weeks maybe."

And then some time later, it seemed like the thermostat broke, causing it to be on full blast unless we turned it off entirely. So that was fun. So we got a different tech out here, and saw this: 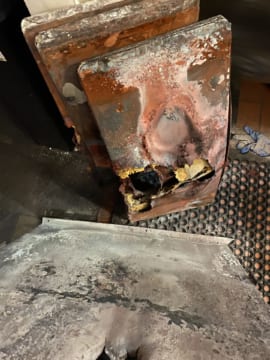 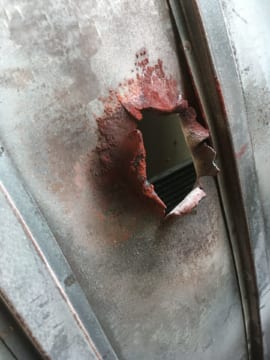 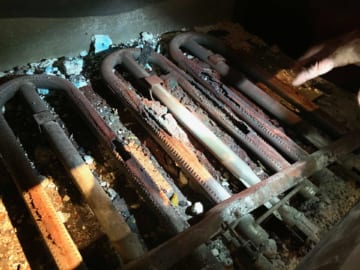 Apparently one of the burners had cracked and was venting more flame than it should have been, which melted a hole through the bottom deck of the oven.

This injury cannot be new, but none of the repair techs we've had through here over the last few years noticed it. Apparently you can't even see these parts of the oven unless you've disassembled half of the thing first. It's a huge amount of work. It's all sealed up and enclosed, you can't just pop off the front panel and peek in.

You're probably thinking, "Wow, you should have been maintaining and inspecting this thing better," and you're right. But I assure you, when we bought this oven brand new in 2015 we asked the manufacturer, "What's the maintenance schedule on this thing?" and they unambiguously said, "Oh, change the stones every couple of years, that's it."

So that's awesome. Maybe their official maintenance program is "wait for it to turn into a geyser of molten steel and fiberglass then buy a new one."

It's mostly fixed now. Some parts have been replaced, and a few more are on order.

We've also been having a slow-motion plumbing nightmare in the DNA Pizza toilet drains because apparently our customers are in the habit of taking great heaping fistfuls of paper towels and flushing them down the toilets. This does not end well. I can't even fathom what they're doing in there. The paper towel dispensers aren't even near the toilets. Why would you grab a hundred paper towels and take them into the stall with you, and whatever it is you're doing, wouldn't toilet paper chafe less? Nevermind, I don't want to know.

So we got some new paper towel dispensers that are the kind where you pull down the handle to get one sheet, instea of the tri-fold "grab a ream or two" variety. Maybe this will help? At least it will slow them down.

Also, "Someone took another of our soap dispenser tops as a trophy" is a thing I have to say on the regular. Whyyyy. Do you put it on the shelf with your empty Budweiser bottles? Punch it in bro.