Slim's and Great American Music Hall recently announced that they will be "partnering" with Golden Voice. That's a euphemism for "turning over most or all control of what events go on the calendar". Basically they are outsourcing booking to another company. I'm sure they have their reasons, but this makes me really sad.

I have no intention of picking on the Slim's team, whom I have the utmost respect and sympathy for, but...

To explain why, first let me start with some numbers. Here is who owns what when it comes to live music in San Francisco:

So that leaves us with the remaining independent live music venues in San Francisco: 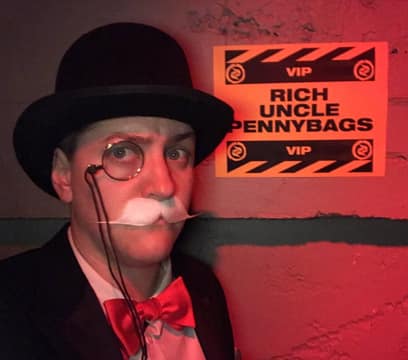 (I'm sure I have accidentally omitted some venues, but I think I got most of the SF venues that regularly host live music by touring acts. I've omitted venues that exclusively host DJ dance parties, because that's a bit of a different business.)

Even omitting all of the massive music festivals, three $17+ billion dollar corporations control somewhere around 80% of all available "seats" for live shows in SF and Oakland.

So what's the problem?

Let's start with a hypothetical.

Let's say you're an agent trying to book a tour for your band. You decide how many days they want to be on the road, how many cities they want to try and hit, and then you start sending out emails to find out what dates are available so you can figure out the routing. Let's say your first call is to some venue in New York, and the talent buyer there says, "As it happens, I also book venues in 15 other cities, so I can put your whole tour on the calendar right now, how's that?" What a relief! So much less work! But then an independent operator in, oh, let's say San Francisco gets in touch with you and says, "I hear your band is going out on tour soon! We love those guys and would like to bid on the show." But then what happens? The corporate talent buyer says to you, "Look, I was giving you a great deal on these 15 dates, but if you want to take your business to my competition instead of taking the full package that I offered you, the price is going to go up. And also, maybe some of those dates are no longer available for you."

So you write back to the small fry, who may have even offered you more money for that particular date, and you say, "Sorry, maybe next time."

Or, let's say you're an agent and you represent a band with a huge draw, as well as a bunch of smaller bands. You're trying to get your bigger band booked on the summer festival circuit, so you're trying to pitch them as big up-and-comers to the agencies booking the festivals. Maybe these guys have been playing 2,000 capacity rooms and you're trying to get them their big break: a late afternoon set in front of a captive audience of 10,000. So while that conversation is ongoing, you are also trying to book a tour for a different, smaller band. You're thinking of putting them in an independent venue who are offering you a good deal, but the festival buyer also books dozens of smaller venues, and you sure don't want to piss them off, because that could mean your job. So instead, you go with the corporate-controlled smaller room as well, regardless of its merits.

"Well that's just business, that's just playing hard-ball." Sure. It's also bad for art, and bad for local businesses. It consolidates control and profit in whatever company controls the routing, even if they don't live in your town. It homogenizes everything.

This is how you end up with venues in dozens of different cities who all have the same calendar. This venue in Portland has the same lineup as that venue in Seattle, just shifted by two days, and so on. Obviously a venue's character is defined by more than just what's on the calendar... but the calendar is a pretty big part.

And those are only examples of how corporate consolidation is bad for the booking side of things. Multi-venue booking agencies also tend to own or have exclusivity deals with ticketing companies as well. Live Nation owns TicketMaster. AEG owns AXS Ticketing and partners with eBay's StubHub. You wanted to use a different ticketing service that you think has better features, or fees, or marketing reach? Sorry, not part of the package. So a monopoly or near monopoly in one industry, booking, squashes competition in another industry, ticketing. That's the very definition of antitrust.

And then there's Live Nation's cozy relationship with their former owner, Clear Channel -- who control the playlists of basically every radio station, and also own most of the billboards.

Plus, much of the time these conglomerates also manage the bands themselves: so in the examples above where the band's agent was talking to a venue's talent buyer? Now they're the same person! And often that company also has a financial stake in a record label. So the same company:

Good luck trying to compete against that kind of vertical integration.

Back in 2009, when Representative Bill Pascrell tried (and failed) to block Live Nation from merging with TicketMaster, he said:

Under the proposed merger, the combined company would have control over nearly every aspect of the live music business: artist management, record sales, promotion, licensing, venue control, parking, ticket sales and resales, all the way down to the hot dogs and beer. According to James Hurwitz of the American Antitrust Institute:

"If the combination is permitted, [the merged company] will have a powerful or dominant position in virtually all of the industry's markets. Viewed in combination, the merger will give Live Nation Entertainment unarguable control of most competition within the industry."

The companies, if merged, would be over five times more powerful than their next eight rivals combined.

The proposed merger would create a vertically integrated entity whose power would extend across five of the industry's six main markets. An entrant or competitor in any of these markets would face the merged firm not only as a market rival, but also as a power in other critically related markets. A new promoter, for example, needs artists willing to perform and venues appropriate for staging the event. A new venue needs artists and promoters willing to book the facility. The vertically integrated firm can withhold these critical inputs, and its rival will suffer.

To avoid such problems, an entrant would need to enter the industry on several levels at once, a burden that makes entry far more daunting and costly. The combined entity could therefore use its five-market vertical integration to restrain trade both by chilling entry and disciplining rivals.

I'm sure the Slim's and Great American Music Hall team had compelling reasons for making the deal that they did. I assume it was a matter of survival. Much like DNA Lounge, Slim's has never been a self-sustainable business. They don't talk about it much, but it's not exactly a secret. They only way that Slim's has been able to remain in business for three decades is because of regular, large infusions of cash from their patrons, Boz Scaggs and Warren Hellman. Since Slim's bought GAMH in 2000, the same has been true of GAMH as well.

Warren Hellman was a great and generous supporter of the arts in many ways, but since he passed away in 2011, I assume the money tap has begun to dry up. Or their expenses have increased and become untenable. I don't know, I'm guessing.

But you only sink decades of your life into a money-losing business if it is a labor of love. I assure you, these folks haven't just been sitting around looking for their big chance to cash out.

Some people, Libertarians and other Free Market absolutists, will look at this and say, "Well this means that independent live music venues are not sustainable businesses in San Francisco, therefore it is right and proper that they should go out of business or be sold off for parts." That's like saying, "Well I guess you just don't deserve to live in San Francisco unless you earn over $150,000 per year: have you tried just not being poor?"

Diverse and extensive entertainment options are a huge part of what makes San Francisco what it is. Or was. Without that, we're just another bedroom community for Mountain View.

I understand that the Slim's crew are soon moving out of their offices in the Slim's building on Eleventh Street, and consolidating into the offices inside GAMH. I assume that they need less space -- and fewer employees -- now that they are no longer booking their own calendar.

If you'd like to prevent DNA Lounge from having to make a similar Faustian bargain some day -- and believe me, we've discussed it -- there's a way you can help: contribute to our Patreon. Show up. And get your friends to show up.