Hooray! We are 100% in support of this, of course. I wrote about this last year, but the bill has finally been introduced. You can help by contacting your senators and assembly members to express support. 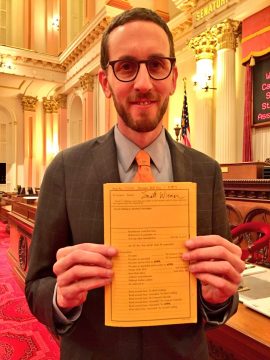 Today Senator Scott Wiener (D-San Francisco) announced the introduction of Senate Bill 905, which will allow -- but not require -- cities to extend sales of alcohol at bars, nightclubs, and restaurants (but not liquor stores) to as late as 4 a.m. The new 5-year pilot program version of the LOCAL Act, which stands for Let Our Communities Adjust Late-Night, preserves complete local control in terms of decision-making and applies only to the six cities whose Mayors have expressed interest in pursuing later hours: San Francisco, Oakland, Los Angeles, Sacramento, West Hollywood, and Long Beach.

Last year, a different version of this bill authored by Senator Wiener (allowing local control throughout California), passed the Senate with a 2/3 bipartisan vote and garnered significant support in the Assembly. Unfortunately, the bill was "held" by the chair of the Assembly Appropriations Committee and not submitted for a vote by that committee. At the time, Senator Wiener vowed to bring back this effort to support nightlife. [...]

SB 905 does not automatically extend alcohol sale hours in these six cities -- it simply creates the option for the cities to choose to extend hours. As with the previous bill, cities will have significant flexibility and can, for example, limit extended hours only to certain neighborhoods, only to certain nights of the week, or only to a few nights a year. Local governments still will have to create and approve a plan, which ABC will also have to approve, to allow for later service hours with full community input. The bill also has a five-year sunset, which means the effects of allowing later service hours can be evaluated and then renewed or discontinued after five years. The full text of the bill can be found here. [...]

Ben Bleiman, California Music and Culture Association and the San Francisco Bar Owners Alliance: "This will would - finally! - allow these California cities who chose to do so to extend their operating hours to match other world-class nightlife cities in the U.S.A and abroad. Currently, we are at a huge disadvantage when competing with cities like Chicago, Washington D.C., New York City, Las Vegas, Atlanta, Miami Beach, and New Orleans, all of whom have late-night service hours beyond 2 a.m."

Joe D'Alessandro, President and CEO of San Francisco Travel Association: "Tourism is San Francisco's number one industry providing significant economic benefits to the people and workforce of our City and our important small business network. Permitting bars to extend their hours allows San Francisco to stay competitive in the night life scene with cities such as New York, Chicago, and Washington D.C. who are all vying for a share of the business, leisure and convention market."

Jim Lazarus, senior vice president of public policy for the San Francisco Chamber of Commerce: "We should determine at a city level how to best attract and support local nightlife businesses. We can't take a one size fits all approach when it comes to nightlife in San Francisco neighborhoods. What's best for one neighborhood might not be best for another, and this legislation allows us to capitalize on nightlife as an economic driver, increase jobs and local tax revenue, when deemed appropriate in a specific area of the City."

There's was some Q&A on his Twitter before the lunatic fringe showed up: