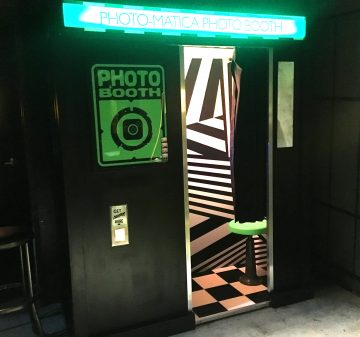 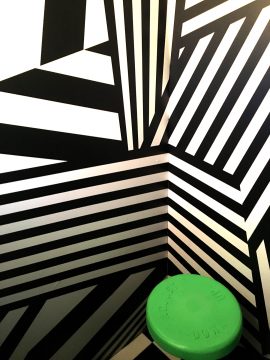 It's by the Main Room front door, but I went with a Dazzle Room interior because lighter backdrops work better than the usual DNA Lounge green-on-black hotness.

This is going to get messy, I'm sure. Please proceed with the self-mortification. It is Mortified tonight, after all.

I sunk a whole bunch of time in to trying to build my own photo booth a couple of times over the last decade, and each time I ended up giving up because solving the basic vending machine problem of "take cash or card, dispense candy" was just too much of a pain in the ass, so we finally just went with an outside vendor, Photo-Matica. We only get a portion of the money, but they maintain the printer, so, fair trade. (Pro tip: printers are a gigantic pain in the butt.)

I'm told that this cabinet started off its life as a chemical film-based photo booth, some time in the previous century, and they refurbished it with the usual digital features.