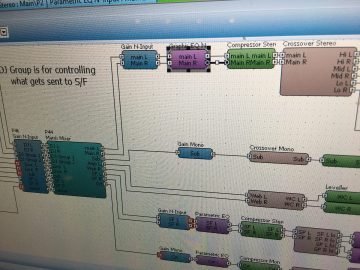 We've just completed a bunch of sound upgrades to help ring in 2018 with a much bigger boom than usual!

Here's what Devon has to say about the work he did over the last few weeks:

The Main room has a new Midas M32 live mixing console, and a new BSS Soundweb London BLU-100 main system processor. The Midas board, with it's legendary pre-amps, brings a big upgrade in live sound quality for live shows. Plus it's compatible with the X32, a board that a lot of bands are touring with these days, so they can just load their show file from a USB stick instead of having to haul in their entire board.

We reconfigured and re-tuned the entire system from scratch over the course of several days. The highs and mids have an astonishing clarity and presence unlike anything we've had in that room. Subtle textures and details in the music pop out like we've never had before in this room. Everything is really clean, and not harsh at all at high volumes. The subwoofers got a 20% increase in power by switching from one 4,000 watt amp to two 2,400 watt amps left over from Codeword. This also changed the impedance from 2 ohms to 4 ohms, which should make for tighter bass, too.

We were able to put some really narrow cuts at the frequencies that made the ventilation ducts rattle, which makes the room sound a little cleaner. The bass is much deeper and punchier, able to hit you in the chest pretty hard. Even at low volumes, the room feels a lot bigger and more present. You can still feel the bass even when the levels are low enough for quiet conversation on the dancefloor.

We replaced the Lounge's subwoofer amp, giving it a noticeable bump in power. The room was also re-tuned a little bit, making it sound better and more even overall.

We moved the Soundcraft Expression SI board from the main room up to Above DNA. Above DNA's system processor has been upgraded to a Soundweb London as well.

We replaced the two older EAW subs under the Above DNA stage with three of the JBL subs salvaged from Codeword. It's a change from two horn-loaded 12" subs to three front-loaded 15" subs. The room was re-tuned from scratch and is a lot cleaner, with way more bass than before. The low end used to taper off a bit about halfway to the bar, but now it carries all the way to the back of the room. Overall, the room sounds a lot bigger.

The Dazzle Room got the fourth subwoofer from Codeword, which helps fill in some much-needed low end. We did a bit of re-EQing on the mains for better clarity.

So, you should come by and check it out...