I saw another argument happen at the bar over water, and it reminded me, again, that I hate it that we sell bottled water. Bottled water is awful:

The reason you should boycott bottled water is because it enables a bullshit, backwards vision for society.

Boycotting bottled water means you support the idea that public access to clean, safe water is not only a basic human right, but that it's a goddamn technological triumph worth protecting. It means you believe that ensuring public access to this resource is the only way to guarantee it will be around in a few more years.

Clean, safe drinking water that flows freely out of our faucets is a feat of engineering that humans have been been perfecting for two millennia. It is a cornerstone of civilization. It is what our cities are built upon. And over the years the scientists and hydrologists and technicians who help get water to our houses have also become our environmental stewards, our infrastructural watchdogs, our urban visionaries. Drinking the water these people supply to our homes is the best possible way to protect future access to water worldwide.

Companies that package water in a single-use bottle are not concerned with the future. They are not invested in the long-term effects of climate change on an endangered watershed, nor are they working to prepare a megacity for an inevitable natural disaster. What they are interested in is their bottom line: Marketing a "healthy" product to compensate for the fact that people are buying less of their other products that are known to case obesity and diabetes -- and selling it for at prices that are 240 to 10,000 times higher than what you pay for tap water.

And yet, sell it we do, because we would be fools not to. People buy it and we make bank on it. We're in no position to just leave that money on the table.

So as long as you're standing there saying "Take my money!" I'm going to say "OK!"

But the water thing, it causes fights and grief pretty regularly. Someone will ask the bartender for a cup of water. They reply: "We sell bottles, or there are free water fountains over there." Most of the time, that person hates the idea of water fountains so much that they just pay for the bottle. Ka-ching.

But sometimes they instead try to grab a cup, and the bartender has to explain to them that cups are not free. (In fact, that cup costs us almost as much as the bottle of water does!) Sometimes this results in yelling, and someone getting thrown out.

It's kind of amazing to me that people are so unwilling to drink from a water fountain, like an animal. The concept is anathema to them. They just won't do it. It's weird.

The eye rolling! Ugggggghhhh, you expect me to drink from a fountain??

I expect that eventually California will make bottled water illegal. Maybe those cardboard milk-carton water bottles (which are even more expensive than plastic) will replace them, unless they make those illegal too. If that happens, I guess that massive revenue stream will just dry up. (See what I did there.) But:

Conclusions. The bottled water ban did not reduce the number of bottles entering the waste stream from the university campus, the ultimate goal of the ban. With the removal of bottled water, consumers increased their consumption of less healthy bottled beverages.

Still, in the world in which we live now, any time I see a nightclub that just has a pitcher and a stack of free cups at the end of the bar I think, "Why do you hate money?"

Oh, and then there's this nonsense: "This startup wants to disrupt the way you drink water. Reefill lets you activate water stations via your phone's Bluetooth".

Yes, if only there were some kind of "net-work" of fresh water distribution, perhaps moving it through a series of tubes, or pipes. That sounds just crazy enough to work. I shall dictate a scroll to the Caesar about this.

Speaking of water, he said transitionally, I spent some time on a restoration project last week. (And this is going to sound like a rambling non sequitur for a bit, but bear with me, it's gonna wrap around and be relevant to the topic at hand, I'm pretty sure.) 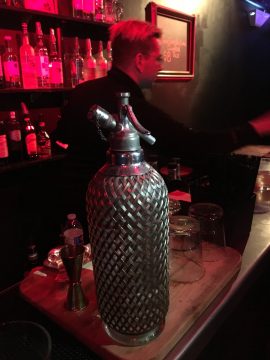 For quite some time, Jared has had this antique seltzer bottle on the shelf behind the Codeword bar. But it didn't work, which was a shame, so I fixed it! All of the rubber had rotted, so it wasn't keeping a seal. (It's from 1930, so maybe it was actually Bakelite or something?) Also there was a piece missing. Anyway, I got it working again. The way these things work is, you fill them with water, vent a CO2 canister into it, shake, and then the bottle is pressurized enough that when you pull the trigger on the tap, delicious fizzy water comes out.

It's a Flintstones SodaStream, basically.

The wire wrapped around the outside is because (I assume) that was the cheapest way to turn glass into a pressure vessel that wasn't going to spontaneously turn into an IED. I'm guessing there were some sad bartenders with glass shrapnel in their faces before they started doing it this way.

The first thing that puzzled me was the canisters: this thing is from 1930 but the canisters are the same form factor as what we have today! They are the same shape as those canisters that go into your "whipped cream" dispenser. Which means that a century ago, there was an industry of putting various gasses into 8 gram steel pressure vessels, and the Invisible Hand of Standardization has dictated that those canisters stay exactly the same. For a century. That's kind of cool. (I tried to dig into the history of them but didn't get far.)

(Speaking of standardization, don't pay those SodaStream jerks for marked-up CO2 in bottles with intentionally-incompatible connectors, just get an adapter and re-fill standard tanks! I put a 50 pound tank on mine 2½ years ago and it still hasn't run out!)

This seltzer bottle produces enough soda for eight to twelve cocktails before it's empty. Today, those CO2 canisters cost about 40¢ each in bulk, so that's 4¢ or 5¢ per serving! That's crazy expensive for CO2: refilling a 50 pound tank costs like $8, so if I did my math right, I think that's like 0.14¢ per drink -- and I'm not sure what our rate is, but we buy our gas hundreds of pounds at a time, so I'm guessing we get it a lot cheaper than that. 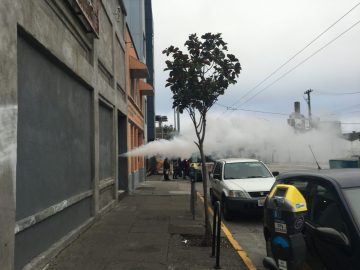 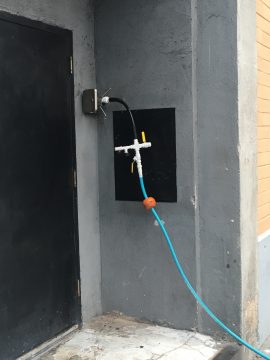 I wonder how much these canisters cost back in the 1930s. Probably more -- cracking molecules and packing gas into single-use steel tubes can only have gotten cheaper since then.

So it's interesting that making fizzy water used to be ridiculously expensive and wasteful -- and that one of the byproducts was that every dozen drinks, you were throwing away a single-use steel pressure vessel! A whole lot of heat and complicated metallurgy went into that thing prior to its journey to the landfill.

It's almost as crazy as delivering tap water to people by truck in single use plastic bottles.