(To the tune of The Ramones.)

As mentioned last month, the "9 San Bruno Rapid Project" means that the sidewalk between DNA Pizza and Harrison Street is being widened. The whole year-long project is slated to begin in the first week of July, and they swear up and down that they are starting with our block of Eleventh Street, so yes, really, our parklet had to be gone this week. Also all of our bike racks. So this happened today: 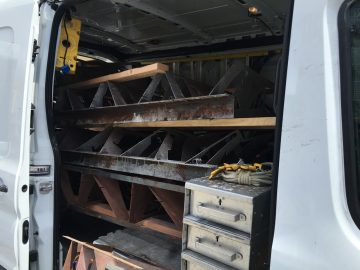 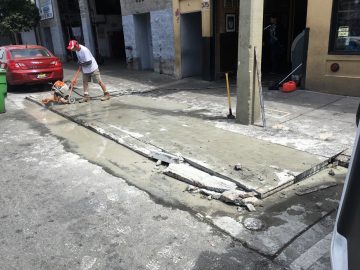 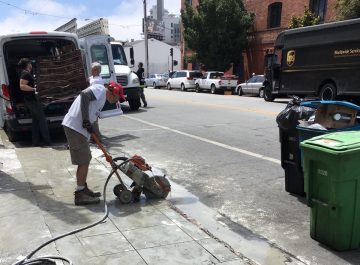 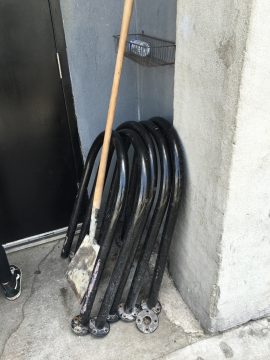 That big stack of metal those guys are sliding into the back of the van is our parklet. It's going to go live in our bread supplier's warehouse (really) for a while. "A while".

Since the project is absolutely definitely starting in the first week of July and it's totally for sure absolutely starting on our block of Eleventh Street, that means there's no chance that we're going to be sitting here looking at the empty spot where our parklet used to be while they do nothing on our block for the next twelve months. Nope.

No chance of that at all.

You remember what it was like when you wanted to sit outside and drink your coffee before we had a parklet, right?

I can't believe we have to go through this already. We only installed the thing less than three years ago.

When we re-install it, it will look different. There are so many constraints about where it can go. There are all of these vaults buried in our sidewalk that we can't cover up, and MTA wants it to be 18" from the curb instead of right up against it (which doesn't make any sense to me, but you can never get a "why" out of these people more sophisticated than "that's policy".) So instead of being L-shaped and sitting at the curb, it's going to be a straight bar with seating on both sides going down the middle of the sidewalk. And it will be smaller by about 9'. We will have to cut off the short leg of the L, plus about 3' on one end.

Part of the reason that they tell us we need to shorten it is to make space for the bus loading zone directly in front of the DNA Lounge main door.

Yup, that's going to work out so well for everybody involved. At least the bus shelter itself is staying where it is, down at the end of the block. But their current plan is that this bus stop will be busy enough that often there will be two busses docked here at once, and one of them is going to load and unload basically directly into DNA Lounge. 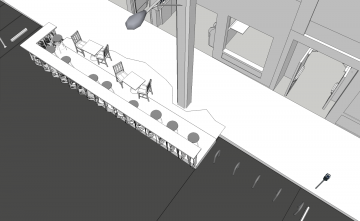 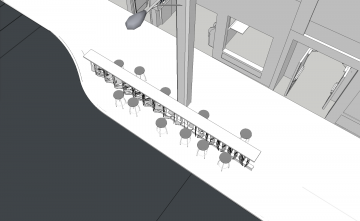 We still don't even know if they're just pouring a new slab into the street to widen the sidewalk, or if they're tearing up our entire sidewalk and re-doing the whole thing. Apparently nobody can answer that question. We're interested in the answer because we'd like to be able to, you know, get in and out of our doors.

Well, though it rarely seems like it, this is supposed to be a blog about running a nightclub, not about interminable construction projects. So let's talk about music, shall well? We have an awesome show coming up this Friday with Casket Girls, Stardeath and White Dwarfs, and Night School. I've seen Casket Girls a few times and they're really fun and put on a great show.

The Casket Girls - Heartless
The Casket Girls - Chemical Dizzy
The Casket Girls - Sleepwalking
Everyone I've mentioned the show to has said, "Who?" and had a look on their face like "I don't actually enjoy discovering new music by bands that I wasn't already listening to in high school," because my friends are terrible people. Let's not turn this into another Gazelle Twin situation -- another show that I spent weeks talking up to everyone I knew, and yet the performers nearly outnumbered the audience. It was an amazing show that none of you saw.

So, yeah. Come to this show, ok? Don't be That Guy. That guy sucks.