New toy! As a thematic companion to the Pac-Man machine at DNA Lounge, I brought my Vectrex in to Codeword. It sits at the end of the bar now. What's that, you ask? Vectrex is a home video game system from 1982 that has a built-in black-and-white vector monitor, meaning the electron gun traces out shapes diagonally instead of raster-scanning like normal TVs. It is an ancient artifact of rare beauty, and it plays Berserk and Asteroids really well. Along with 70 other games -- I have this multi-cart that has everything ever released for the system. 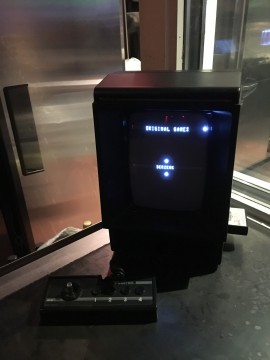 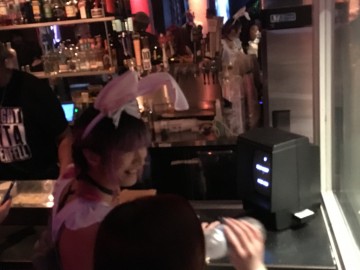 And 30 seconds after I put it on the bar, it was already being played by anime bunny-girls who were born at least a decade after this thing rolled off the production line. So, mission accomplished I guess!

It is reasonably well secured, but be gentle with it, ok? Try not to get it too sticky.

Actually, there's a pretty nice emulation of it here that you can play online, but it's really just not the same without the weird, flickery glow from that little CRT.