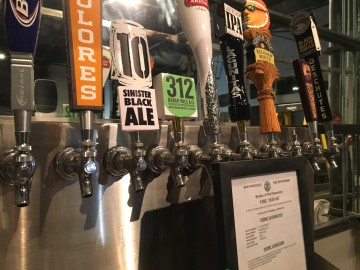 Today much running around was done, many forms were filled, many permit-fee checks were written... We had our final fire inspection, and we learned that while last week we had what we were told was our final-final health inspection, we have to have our final-final-final health inspection tomorrow. And to do that, the 27 B Stroke Six has to be stamped, and the receipt initialed, before 9:30 AM. But we can only pick up the 27 B Stroke 6 after 8 AM, and the people who have to do the signing and stamping are not available after 8:30 AM. And are four floors away. So that's going to be fun.

We are told that the ABC paperwork made its way from San Francisco to Sacramento on Friday, so something "should" have happened today, but we don't get to learn whether that is the case until some time tomorrow.

And, the distributors aren't allowed to deliver to us without the ABC permit, so we may be hooking up all the kegs mere minutes before pouring them.

So maybe we'll be open Tuesday evening like we've been telling everyone? Or maybe we won't be open for days. Who can tell.