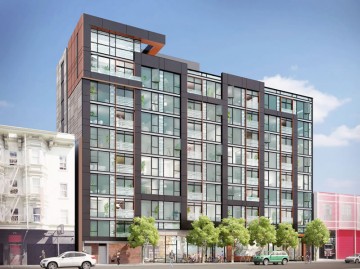 Here's a render of what is to be our new neighbor to the West. That itty-bitty building cowering and shivering in the lower left corner is CW.

As expected, this latest batch of condos are another hideous, soulless cubic monstrosity, a Lego set from Hell. It looks like a mall. It looks like Cold War Brutalism with a splash of pastel. Why do they keep making these condos so ugly? I suppose the answer must be, "That's what you get when spending the absolute minimum on construction materials is your top and only priority."

There will be 114 condos, but hey, a whopping fourteen of them will be "below market rate", which you qualify for if you make less than $81,000/year.

Their render shows ground-floor commercial, and they have optimistically sketched a cafe in there. Which I have seen actually happen in these kinds of developments approximately never. The ground floor "commercial" space in buildings like this seems to pretty much sit 100% empty for a few years, then it's an art gallery for 6 months until someone's trust fund runs out and/or the money is sufficiently laundered, then it sits empty again. E.g., the very similar looking condo development on 4th and Bryant: I think the whole ground floor of that block has been vacant for more than a decade. The whole of King Street is barely any better: all the condos conceded to "ground floor commercial" instead of putting in the parking lots they actually thought they could sell, but those turned into dozens of empty storefronts, where the only ones that are actually occupied are national fast-food chains.